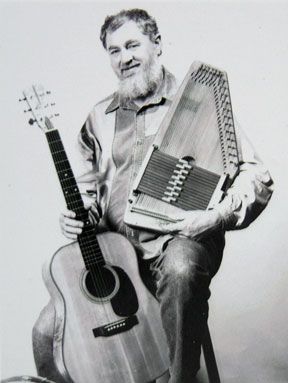 Evan was born at Nullawarre on the coast of Victoria just to the east of Port Fairy. He spent his first 20 years on the family farm which bordered the sheer cliffs of the magnificent, infamous “Ship Wreck Coast” of southern Australia.
As a 4th generation descendant of the earliest Scottish and Hebridean settlers in the area, he may well be described as being “bloody well Australian through and through”.
His great love of folk music and the history of the land and the sea, comes from these early days where the experiences of ship wrecks and the oral transmission of the local history were a part of the web of everyday life.
From his father’s family he inherited his musical talents. Their music centered around the hymns sung in their ecumenical family chapel where a favourite Aunt played the organ, and was happy to share her knowledge and the wonderful harmonies of her music. The musical flame she lit still burns brightly in Evan’s music today, even though his style and material have diversified greatly.
After his father’s sudden and untimely death, Evan headed for Melbourne and its thriving Folk Scene — vintage Traynor’s, The Green Man, Jimmy Watson’s and all, where his natural talents developed into his distinctive enthusiastic style. His open-minded approach to music saw him receptive to all genres — Traditional and Contemporary, Gospel and Blues, Jazz and Jug, with instruments or gloriously unaccompanied — his total lack of prejudice framed his ongoing musical philosophy, “There are only two kinds of music — Good and Bad!”
Moving on, guitar in Mini Moke, Evan travelled north to warmer climes, continuing to indulge his passions for music and folklore and their oral transmission. He soon settled into the young and enthusiastic folk scene of Brisbane as a solo performer. He added blues harp and autoharp to his performance repertoire. He went out of town on collecting trips meeting “grey beards” and swapping songs and stories.
He formed the infamous “Ramitta P. Memorial Jug Band” with Phil Cook (guitar and mandolin), and “Barney” Barnfield (ceramic jug and washboard), and all taking turns on The Megaphoned Kazoo as they had a free hand/mouth on stage. They literally coined the phrase “Don’t clap, throw money!” as they asked their audiences to donate towards the cost hiring a bus to ship a whole load of Brisbane folkies to Melbourne for the 1st “National”, the 1967 Port Phillip Folk Festival. They repeated the feat once more for the 2nd National held in Melbourne in 1968.  Needless to say, a very good time was had by all. So much so, that Brisbane was mooted to host the 3rd National Folk Festival — the first to be held away from Melbourne.
The inimitable Harry Robertson chaired the Organising Committee. The name Moreton Bay Folk Festival was chosen to continue our links with our origins via the sea. The office was set up in the house Evan rented (in an ongoing folkie tradition) in Hampstead Road, Highgate Hill.
Evan was “volunteered” in typical folkie style to be Festival Programmer. His programming for this 1969 Moreton Bay Folk Festival included concerts and workshops encompassing not only the usual Anglo-Celtic and Australian Traditional music, but also more Contemporary singers and players. His aim was for hands-on, open interaction and exchange of material and techniques, rather than theoretical pontifications of “experts” from their “ivory towers”.
The radical 1969 Moreton Bay Folk Festival (now more often referred to as the 3rd National Folk Festival) was a resounding success both musically and financially.  The concluding Come-All-Ye in the Royal Exchange beer garden took good care of the fiscal surplus, whilst the roof was raised by the surges of instruments playing and voices raised together in song. The friendships formed then are still strong today.
The 1969 Festival firmly set Evan’s dream for the future — music shared; played BY folk, FOR folk, as an on-going process. These days he really enjoys the smaller, more intimate folk festivals with “More players than ‘punters’!” He is thrilled to see the talented and dedicated young folk who are being nurtured into polished performers whilst still retaining their individuality and integrity. Of the larger festivals, he feels that the National Folk Festival (now held in Canberra each Easter) has achieved a good sustainable balance of quality and quantity.
Although known mainly as a solo performer, Evan is a real self-starter with a great diversity of interests that he loves to workshop — Sea Shanties, Jug Band Music, Home Brewing, Harry Robertson’s songs and poems, The Weavers’ tradition, Building and Playing the Aussieharp…
He may also often be seen with Ian Dearden (his current partner in “legal” crime) workshopping, “Drinkin’, Drivin’, and Drugs”, “Chains, Chains, Chains!”and most recently “Woody Guthrie — Never Tire of the Road”. Of late Evan has stepped aside from some of his more public commitments to allow more time for his own music. The result has been the development and building of Australia’s own autoharp-style instrument, the “Aussieharp” So far this year he has put two totally laminated Aussieharps together — one in Chromatic tuning, the other Diatonic. To take the long-felt pain out of tuning autoharps accurately, he has designed finely engineered “Aussieharp Fine Tuning Rockers” which make the job quick, easy and accurate.
Evan and Lyn have recently purchased a fishing shack on Elimbah Creek  on the Pumicestone Passage. The re-development of this site is to be the start of their personal project to cut back on their various business activities and devote more time to the pursuit of the sanities of life — a sustainable environment, visual creativity, instrument making, music and the folk process.